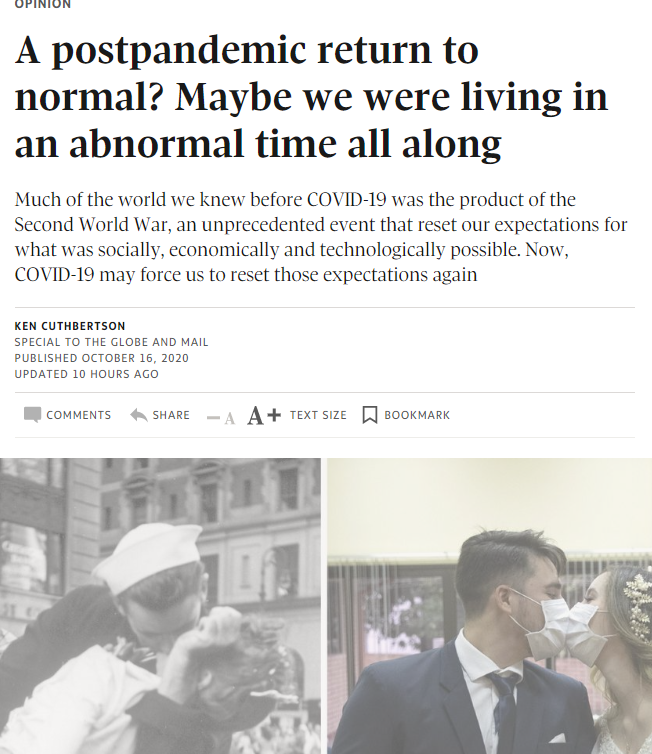 People whose parents weren't even born til after WWII shouldn't be waxing nostalgic on parallels they can't see.

It has worked better than I think they could have ever hoped. This is one crisis they pumped full of steroids and it delivered big bulging government like hasn't been around since they fought a world war.

Just think of it: Justin, clinging to a fragile minority government, right on the heels of corruption revelation after corruption revelation, law breaking, lies to top all lies, is perfectly secure in the PM's chair likely until he's forced to call an election simply by the constitution. He's probably going to set a record for the longest one in fact.

That ain't too shabby for a errrr political career built on magical thinking and routinely lying.

I know its a long shot but perhaps Trump will win bigly and a decision is made soon after to purge all the commie elements in 5-eyes. I'm hoping the USA will not tolerate snow Venezuela on their Northern border.

There is no peaceful solution to this any longer I'm afraid. To be clear I think its more likely that Trump wins and the status quo continues on with him tweeting but the commies continuing to win the big war. If that scenario plays out then there will be a great culling of humanity.

Its us or them.

if Americans get rid of their traitors they are definitely not going to permit the communist conspiracy to continue to exist. At the very worst expect war with china, best case scenario is hard enough pressure on canada by tariff that canadian retard sheep cant ignore the corruption anymore.

Theres a reason trump says "itll never happen to an american president again". he has no intention of allowing the commies to continue because he knows in another 100 years it'll be the same shit.

We need helicopter rides for seditious "journalists" and media.

If there were a woke word for patriot, I think you just earned it!

Yeah, c'mon man, don't you remember all those 1900s photos of people in masks?!

Lol I bet that cuck didn't even consummate the marriage.

Or if he did he wore a mask like Dr. Pig's Ass recommended.

To reset everything would be to risk the privileged position that Canada has benefited from, and I most certainly don't think the working poor, nor the middle-class, will want any part of that.

if we eliminate the corruption and simply use our natural resources for ourselves well be the richest country per capita nation on earth bar none. Ironically, canada is the country that should be communist with our resources/population.

That would be highly unlikely.

Canada was an economic backwater for most of history, we became a developed nation due to exports in natural gas, oil, and auto, to the United States, following World War II.

Here is a chart.

I'd argue the world we knew before covid (Jesus I hate that term) was a product of 9/11. Life and living was much more free before that.

Formerly known as r/metacanada, a reddit forum largely (but not exclusively) populated by conservatives, many of whom were arbitrary banned from other forums for being conservatives.

Here you'll find mainly a mix of shitposting, news and political discussion, but feel free to discuss whatever you want within the rules below.